It has premium looking exterior with a ceramic white anodized aluminum finishing. If you look at the keyboard, there is a Oxford Blue leather like surface. There is a magnetic hinge which allows quick switching from productivity mode to creative mode and vice versa.

The 2-in-1 Chromebook X2 features in 12.3-inch IPS WLED-Backlit display with 2400 x 1600 pixels resolution. It has Corning Gorilla Glass 4 protection for durability. Under the hood is 2.6GHz Intel Core M3-7Y30 processor with Intel HD Graphics 615 GPU.

The base model of Chromebook X2 packs in 4GB LPDDR3 (1600MHz) RAM and allows up to 8GB RAM. There is 32GB eMMC storage space and allows further expansion up to 256GB using MicroSD card. A 48Wh 4-Cell Li-Ion battery powers the hardware. It is said to last up to 10 hours. 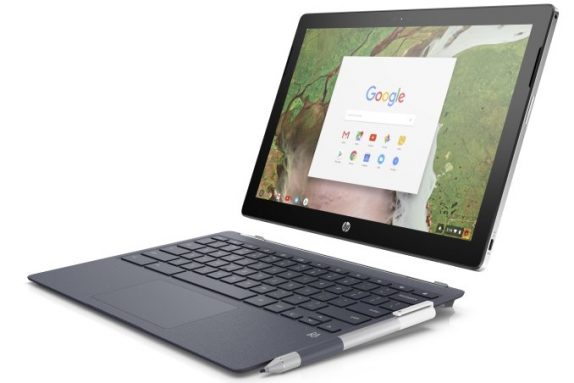 The 2-in-1 also sports two Stereo HP speakers which are custom tuned by B&O Play. There is a 5MP camera at the front and 13MP shooter at the back. usual connectivity options like Wi-Fi 802.11ac 2X2, two USB 3.0 Type-C and Bluetooth V4.2 is supported as well.

The HP Chromebook x2 hits a trifecta for customers, combining the productivity of the Chrome OS and power of the world’s most-used app platform into a versatile form factor ideal for experiencing all the Google ecosystem has to offer. As the world’s first Chromebook detachable, it will unlock new ways for people to create, collaborate and consume within Chrome and the Google Play Store.

LG G7 ThinQ to be announced on May 2nd