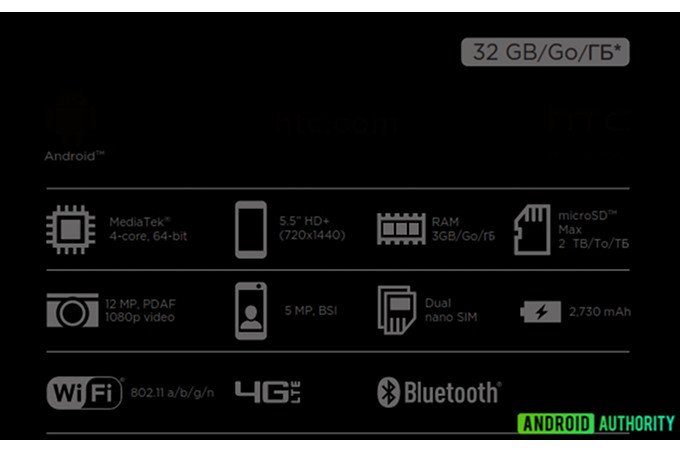 HTC is working on a new Desire Series smartphone called HTC Desire 12. This piece of info is further verified by a leaked retail box which was obtained by guys at AndroidAuthority.

Thanks to it, the HTC Desire 12 specifications have been leaked. Considering the leaked info, it will be an entry level smartphone with 4G LTE support.

The handset will sport Dual Nano SIM slot. It has 5.5-inch multi-touch display with 1440 x 720 pixels HD+ resolution. The screen has 18:9 aspect ratio meaning that it will slim bezels.

While the leaked retail box of Desire 12 does not mention specific processor, it does reveal that it has quad-core 64-bit MediaTek Chipset.

The SoC is mated with 3GB RAM and 32GB internal storage, which is further expandable up to 2TB using MicroSD card. In terms of optics, the handset will sport 5MP front camera with BSI Sensor. At the back side is 12MP main camera with LED Flash, PDAF and 1080p video recording support.

Other specs of Desire 12 include 2730 mAh battery capacity. Connectivity options like Wi-Fi 802.11 a/b/g/n, Wi-Fi Hotspot, Bluetooth and GPS will be present as well. We are expecting the cell phone to run on Android 8.0 Oreo OS.

We are not sure about exact release dates but we are expecting Desire 12 to come along side HTC U12 flagship. Further details should emerge as MWC 2018 nears.