HTC U11 EYEs to be announced on January 15 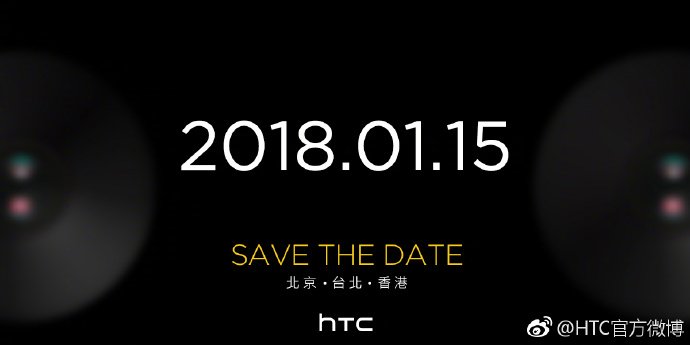 HTC has confirmed that it will announced a new device on January 15th, 2018. It has released a teaser at its Weibo account saying “Save the Date”. Along with it, there is a description where HTC quotes “EYE” hinting that the device will be HTC U11 EYEs.

According to the rumors, the U11 EYEs is expected with 5.99-inch or 6-inch (2160 x 1080 pixels) multi-touch LCD3 display with 18:9 aspect ratio.  Under the hood might be a Snapdragon 652 SoC with 4GB RAM and 64GB internal memory. There should be a MicroSD card slot for further expansion.

You can also expect a premium variant with Snapdragon 660 SoC inside, which could be announced a the same event. The smartphone is also believed to be powered by 3930 mAh non-removable battery.

Other details include dual-LED flash and a single lens main camera. Usual connectivity options like 4G LTE, Wi-Fi, Hotspot, Bluetooth, USB Type-C and GPS will be present as well.

The device is believed to be IP67 rated for water and dust resistance. It will run on Android Nougat OS and comes with Edge Sense feature as well.

The HTC U11 EYEs is expected go on sale in Hong Kong from January 17th and could cost HKD 3898 (US$ 398 approx.). It will also land in China and Taiwan soon after launch. The device will launch in Black, Silver and Red colors.