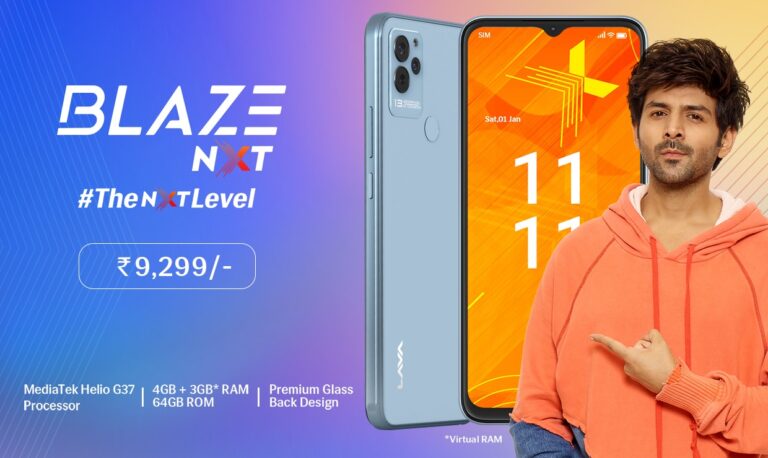 The phone comes with dual Nano SIM slots and a dedicated microSD card slot. It is powered by Android 12 OS out of the box. For fast and secure unlocking, LAVA has placed a rear mounted fingerprint sensor on Blaze NXT.

The LAVA Blaze NXT specs include 4GB RAM and 64GB on-board storage space. It has MicroSD card support up to 256GB for further storage expansion.

For optics, it has an 8MP selfie camera with F/2.0 Aperture lens. At the back side are triple cameras with LED Flash. These include 13MP main with F/1.8 Aperture, 2MP depth sensor with F/2.4 Aperture and VGA lenses at back.

The Blaze NXT costs Rs. 9299 and comes in Glass Blue, Glass Green and Glass Red colors. It will go on sale at Amazon.in and Lava’s e-store from December 2nd.

The Blaze NXT has been launched keeping in mind consumer feedback and aligns with Lava’s vision of introducing hi-tech smartphones at an affordable price point. With the new smartphone, which is reasonably priced and has a great design, camera, and user experience, we hope to improve our customers’ overall experience. The Blaze NXT comes with Glass Back and is the classiest entry-level smartphone to meet the demands of next-gen consumers.