The OnePlus 7 Pro is slated to go official on May 14th along with OnePlus 7. Ahead of its announcement, the Pro model with model name ‘OnePlus GM1917’ has made its way at GeekBench.

According to the benchmark, the OnePlus 7 Pro runs on Android 9.0 Pie OS (with Oxygen OS) out of the box, which is expected from a flagship.

As rumored earlier, the OnePlus GM1917 is powered by octa-core Snapdragon 855 Mobile Platform with Adreno 640 GPU. Interestingly, the variant listed at GeekBench houses 12GB of RAM. 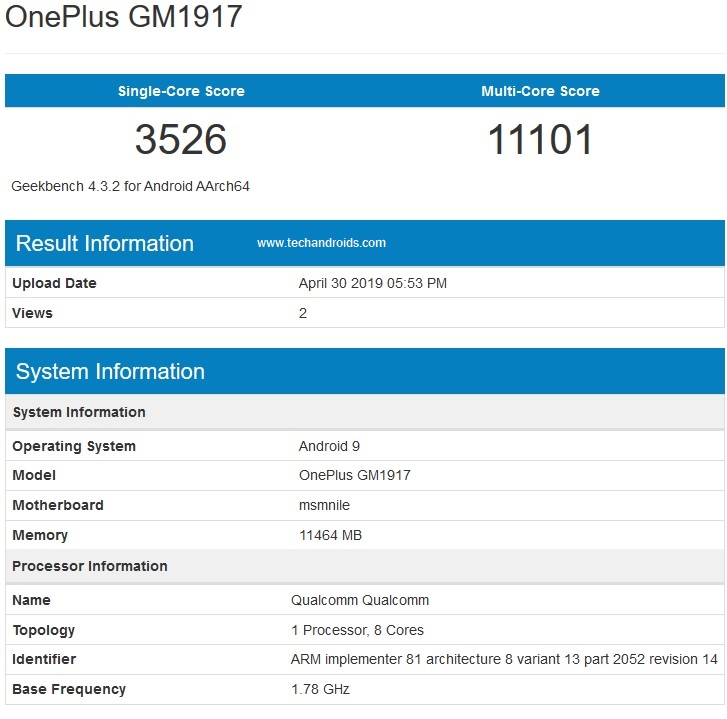 Talking about the OnePlus 7 Pro GeekBench scores, the smartphone managed to fetch 3526 points on single core test and 11101 points in multi-cores.

According to the rumors, the device is said to pack in a pop-up selfie camera thus will sport very slim bezels. It is expected with 6.7-inch OLED display with 90Hz refresh rate and Quad HD+ resolution. At the back side will be a triple camera setup and will allow 3X optical Zoom. Battery is said to be of 4000mAh capacity.