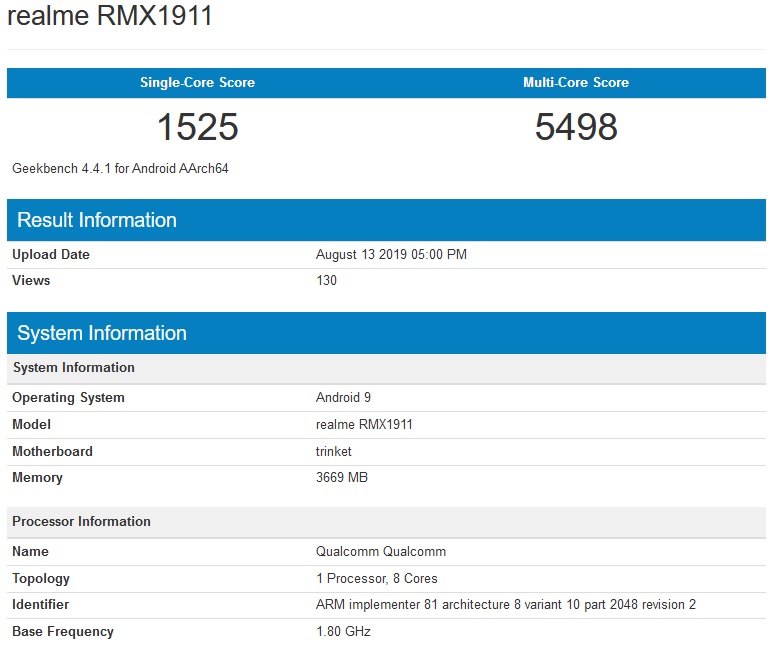 Realme is all set for the launch of its new Realme 5 smartphone. The new series has been already teased to feature a quad-camera setup.

Company has also confirmed that Realme 5 will feature in a 48MP primary rear camera with Sony IMX586 sensor. Now, the handset made its way at Geekbench bearing model number RMX1911.

According to the benchmark, the phone runs on Android 9.0 Pie with ColorOS 6.0 on top. Company has also teased that it working on RealmeOS which will be introduced at a later date (not in this particular phone).

The Geekbench has confirmed presence of octa-core Qualcomm Snapdragon 665 mobile platform with Adreno 610 GPU. The SoC is paired with 4GB RAM in this particular Realme 5 RMX1911 model.

Talking about score, the handset managed to fetch 1525 points in single core and 5498 points in multi-core test.

Also expect dual SIM support with Dual 4G VoLTE. All the details of Realme 5 will be out on August 20th, once the mobile officially launches.