[Rumor] Nubia HIPAD tablet in works according to leaked poster 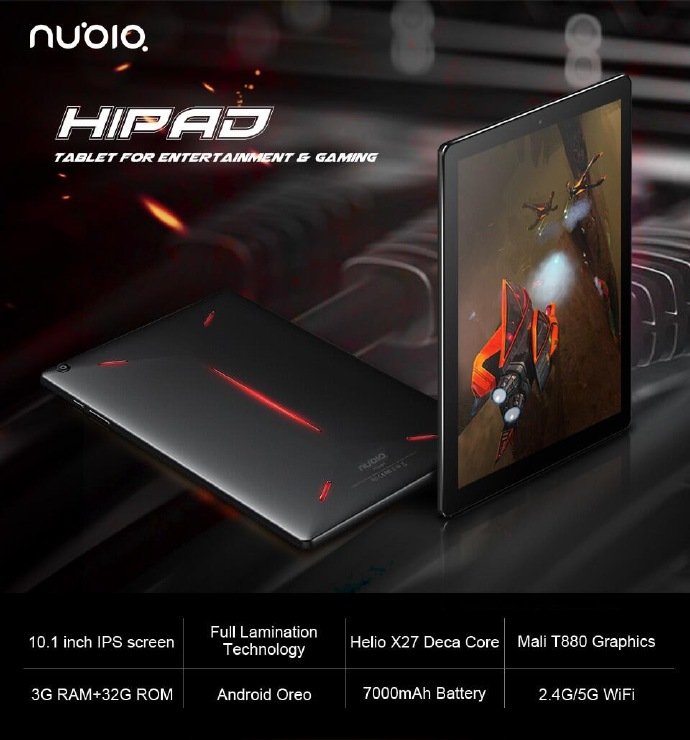 Nubia has already unveiled its Red Magic Gaming smartphone back in April. Now, it seems like Nubia is working on a tablet for gaming and entertainment which company might call it as Nubia HIPAD.

A poster of Nubia’s HIPAD tablet has surfaced at Weibo. The poster not only gives a brief idea on its specifications but also its design. The tablet is being quoted as “HIPAD, Tablet for Entertainment & Gaming“.

The seems to have a design similar to Red Magic phone. RGB lighting patterns are clearly visible along with vents at the back, with its rear camera placed at top left corner. Power button and volume rockers are at the right edge. The front screen has notable bezels.

According to the leaked poster, the Nubia HIPAD comes with 10.1-inch IPS display which uses Full Lamination technology. It will get processing poewr from Deca-Core Helio X27 processor coupled with Mali-T880 GPU.

This Android Tablet runs on Oreo OS and is said to have 3GB RAM and 32GB on-board storage space (obviously expandable). It is also expected with 7000 mAh battery and will support Wi-Fi 802.11ac and Dual Band.

Nubia hasn’t confirmed anything about HIPAD so readers, please take it with a pinch of salt.