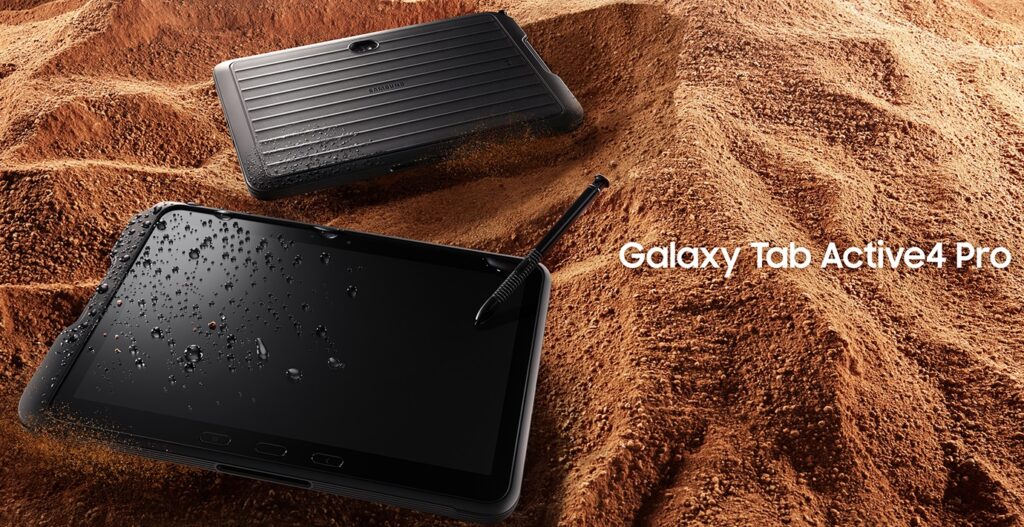 It will go on sale in Europe starting September. The tablet will also land in markets of Asia, Latin America, North America and Middle East later in 2022.

Starting with dimensions, the tablet measures 242.9 x 170.2 x 10.2 mm and weighs 674 grams. It comes with IP68 and MIL-STD-810H military grade ratings. It has an Inbox Protective Cover (1.2m anti-shock) and Corning Gorilla Glass 5 protection as bonus.

The Galaxy Tab Active 4 Pro comes in Single SIM and Dual SIM options. It comes with S Pen inside which is IP68 rated as well. You get dual microphones for better noise cancellation.

This Samsung Tablet comes with a fingerprint sensor on home key. It has support for facial recognition as well. The XCover Key and Top key provides added customization.

Under the hood is a 6nm octa-core processor which is unnamed at the moment. However, its Google Play store listing has revealed Qualcomm Snapdragon 778G SoC. There is 4GB/6GB RAM options and 64GB/128GB storage variants. There is support for MicroSD card for further storage expansion.

The Galaxy Tab Active4 Pro runs on Android 12 OS with intuitive One UI out of the box. Samsung has promised up to five years of security updates and three OS upgrades. It comes with Samsung KNOX Suite for enterprise level security.

In terms of optics, this rugged tablet has an 8MP front camera with F/2.0 Aperture. At the back side is a single 13MP auto focus camera with LED Flash and F/1.9 Aperture lens. The device includes a 7600mAh (typical) user replaceable battery.

[Official] Samsung Galaxy A14 5G is launched in US markets