Earlier this year in April, Xiaomi’s gaming phone Black Shark was unveiled. It came with model number SKR-A0. Now, company is gearing up yet another handset.
A Black Shark smartphone bearing model AWM-A0 got certified by TENAA, a compulsory Chinese certification authority. The listing has not revealed all the Specifications of the phone though.
The certification does note that Black Shark AWM-A0 will support TD-LTE, FDD-LTE, TD-SCDMA, WCDMA, cdma2000, CDMA 1X and GSM standards. The smartphone will support dual SIM cards with dual standby and will be powered by Android OS (probably Android Pie).
According to certification authority, the phone measures 160 x 75.26 x 8.7 mm. It has 5.99-inch multi-touch display and is powered by 4000 mAh battery capacity. 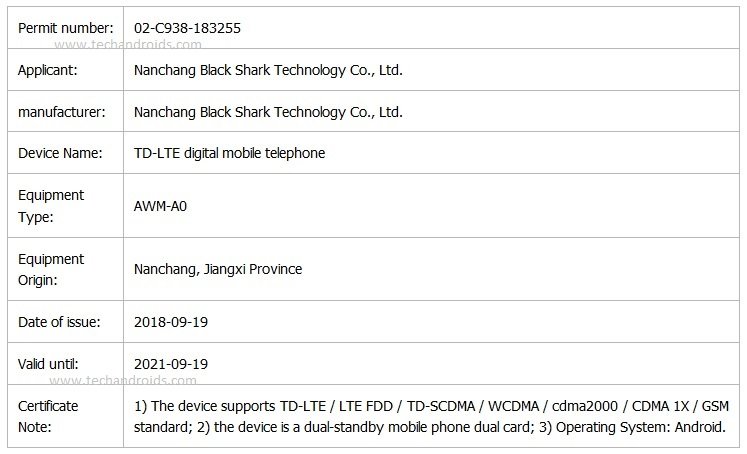 We also have photo of this upcoming Black Shark Helo (AWM-A0) gaming phone. If you look at the design, there are several changes if you compare it with company’s first gaming phone. Just may be, it is a slightly cut down model (We are not sure).
It does seem to be a gaming device though. It has a fingerprint sensor placed at the back which will support Ali Pay and We Chat payments. Just above it (top center) are LED Flash and vertically aligned dual cameras.
Volume rockers and power buttons are placed at the right side and there is a dedicated one-touch SHARK key for enhanced gaming experience (also seen in predecessor). The front display comes with slim bezels while a selfie camera is placed at the top front.
We will get more details on Black Shark AWM-A0 smartphone in coming days, which we will surely cover so stay tuned.
Note: The handset was rumored to be called as Black Shark 2 but was introduced as Black Shark Helo. We have updated the article for the same.